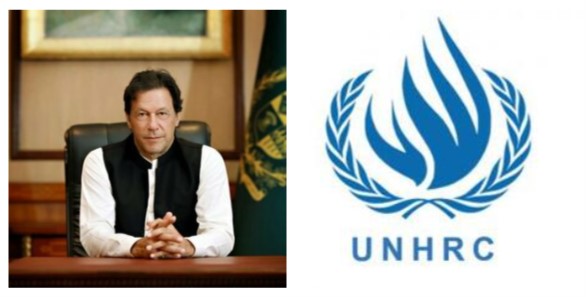 United Nation Human Rights Council or UNHRC is an incompetent United Nations body, working for the protection of Human Rights across the world ‘except’ Pakistan. The body reacts on almost every Human Rights related matter, but when it comes to calling out Pakistan and its government for the persecution of religious minorities using blasphemy laws and other mob activities, the UNHRC acts like the three monkeys of Mahatma Gandhi that sees no evil, hears no evil and speaks no evil.

The persecution of religious minorities in Pakistan is growing day by day. During Pakistan’s General elections in 2018, Imran Khan promised for a ‘Naya Pakistan’ where every person would be treated equally irrespective of their religious backgrounds, and the minorities would be protected from violence, persecution, and forced conversions. However, after the election, Khan stood by his promise of delivering a ‘Naya Pakistan’ but of different nature, a violent and intolerant Pakistan with no human rights for minorities. Not only the non-Islamic minorities but, the Islamic minorities have been facing religious targeting as well.

Recently, Tariq Shah of the Shia community was hacked to death in broad daylight by a Sunni Muslim, Liaquat Haider over an alleged blasphemous activity.

Shia and Ahmadi communities are more vulnerable to such barbaric attacks in Pakistan. Both these communities share some common beliefs, practices and school of thoughts with the Sunni community. There are few disagreements within each community and that is the root cause of violence and blasphemy in Pakistan.

Reacting to this tweet, one user said, “According to the constitution of Pakistan, Ahmadi’s are not allowed to name their temple as Mosque or Masjid. Hence, the justice has been done at Gujranwala.” (According to the Pakistan Penal Code 298C, an Ahmadi calling himself/herself as Muslim or preaching and propagating his/her faith will be penalized with 3 years of imprisonment and fine.)

There were many such comments justifying the vandalization of the Ahmadi mosque in Garmola Virkan Village, Gujranwala. Such is the mentality of people living in PM Imran’s ‘Naya Pakistan’.

The condition of Non-Islamic minorities (Hindu, Sikhs, and Christians) is even worse, they live with the constant fear of mob lynching. The degree of violence is such that a large number of minorities live in dread of losing their life. Women from minority communities are among the most vulnerable group as horrid acts such as rapes, forced conversions, and forced marriages have become common practices in Pakistan.

Some estimates claim that each year, about 1000 young Hindu, Sikh, and Christian girls are kidnapped and forcibly converted to Islam.

Looking at the condition of minorities living in Pakistan, the million-dollar question one can ask is: Where is UNHRC and what is it doing to ensure the well-being of these people?

The answer is quite simple, the council has turned a blind eye towards the atrocities carried out by the government of Pakistan and its majority community. While the headquarters of UNHRC is in Geneva, it has relegated itself to Twitter, essentially making its headquarter worthless and just for show.

The irony is, despite being a regular offender of human rights violations, Pakistan has been re-elected to the United Nations Human Rights Council. In a secret ballot voting by 193 members of the UN General Assembly in the month of October, Pakistan secured 169 votes.

Back in November 2020, UN Watch, a Geneva-based NGO that monitors the performance of the UN, slammed PM Imran Khan for his statement, justifying the murder of a French teacher for exhibiting the Charlie Hebdo cartoon in a classroom. The official Twitter handle of the Government of Pakistan quoted the statement of Imran Khan saying, “Blasphemy in the garb of freedom of expression is intolerable.” The NGO gave a befitting reply to Khan saying, “Your presence on the U.N. Human Rights Council is intolerable.” In response to UN Watch, the Pakistan government accused the NGO of being biased against Islam and further said that the NGO has nothing to do with the UN.

PM Imran Khan thinks of himself as the defender of Islam but the harsh truth is that minorities are not safe within Pakistan. The Islamic and non-Islamic minorities living in the country are facing atrocities at the hand of the majority community and the government. The world must take the cognizance of genocide that is slowly taking place in the state of Pakistan before it’s too late.

Satyam Tiwari
Satyam Tiwari is the Founder and Editor-in-Chief of Parakram News. He is as unbiased as any other popular journalist out there. Satyam has started this media portal to bring a necessary change in the perception of people living in this beautiful country, 'India'.